The ideal FRET sensor reacts to it’s agonist with high sensitivity and fast kinetic response, whereas it is completely insensitive to related compounds and environmental factors. We continue developing our FRET sensors using improved GFPs and novel geometric designs.This has resulted in new Epac FRET versions with very much improved characteristics. Epac-based FRET sensors have been widely used for the detection of cAMP concentrations in living cells. Originally developed by us as well as others, we have since then reported several important optimizations that make these sensors favourite among many cell biologists.

Plasma membrane PIP2 concentration regulates cellular responses such as ion channel gating, receptor internalization and the cortical actin cytoskeleton. Using a GFP based FRET-based assay for PIP2 that we developed earlier (van der Wal et al. 2001), we study the regulation of agonist-induced PIP2 breakdown and its subsequent resynthesis by PIPkinases Figure 3 and Video 1. 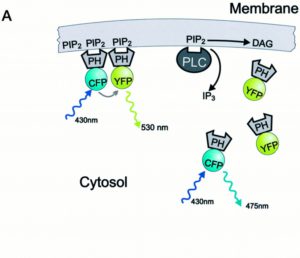 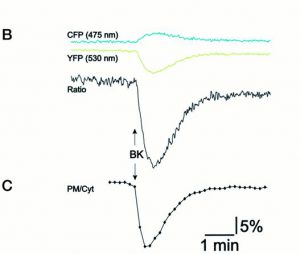 Figure 3: A schematic representation of FRET occurring between CFP-PH and YFP-PH bound to the membrane. Upon hydrolysis of PI(4,5)P2, PH domains translocate to the cytosol and FRET ceases.

Video 1: A confocal time series of a N1E-115 cell transfected with a by deletion desensitised NKA (Neurokinin A) receptor and YFP-PH (a PIP2 sensor). PIP2 (YFP-PH) can be seen clearly at the membrane. The cell is then exposed by a stream containing NKA and a fluorescent marker dye. The agonist  induces local  PIP2 breakdown upon NKA receptor stimulation, causing YFP-PH to falls off the membrane (van Rheenen et al. 2002).